I didn’t officially start training for the half marathon until mid-January of this year but I began preparing in mid-December 2015. At that point I had dropped twenty pounds off my weight since 2013 but for 2015 I seemed stuck at about 225 pounds. I knew I needed to drop more weight if I wanted at achieve my goals and not get injured in the process of my training. I admit, I like my beer, wine, bourbon and gin. I knew the only way to get unstuck in my weight loss was to give up the empty calories of the booze. You know what? It worked! In mid-December I gave up drinking alcohol completely. Yes, even through the holidays and the new year celebrations. Since mid-December I’ve lost at least 12 pounds. Depending on the day–maybe more like 14 pounds. The chart below shows my progress. 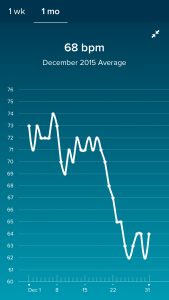 The chart above is from December. My average RHR for the month was 68 BPM. Not bad for someone my age but it certainly could be better. Notice the steep decline in the latter part of the month? That’s when I stopped drinking the booze.

Now compare my RHR chart for this month. I’m averaging a RHR of 55 BPM. Quite an improvement for sure. My RHR has been at this level for two months now. Why I’m I convinced the lower RHR is due to cutting back on the booze over my increased physical activity? I mentioned in my last post about my half marathon training that I had indulged in a little alcohol consumption in the past few weeks. The two blips in the chart below where my RHR hit 60 BPM happened during and immediately after my acohol consumption.

I can’t honestly say this is enough to convince me to never drink alcohol again but it’s enough proof I will think twice before I pop the top off a beer. If I hadn’t got to see the results with my own eyes I would never believe it. That’s changed now–I’m a believer!

Afternoon delight
Today is the 2nd anniversary of my triple bypass surgery. Time flies when you’re having fun. Feeling very thankful and very blessed. #cabg #blessed #thankful
Slow and steady today. Hadn’t planned on running the #indymini for a couple more weeks but my schedule changed and the weather was great. Sure missed that nice flat course in Indy.
#irunforahmaud
Running the Indy Mini Marathon again this year. It’s going to be very different running a virtual #indymini
Tree pollen and the COVID-19 have made it hard to get out to run. A little rain yesterday, cooler temps made today’s run pretty enjoyable. Record high temps are in the forecast lasted in the week. We’ll see.
Loading Comments...
%d bloggers like this: