Thought I’d share with you my running gear of choice. Now some of this stuff I use all the time while other stuff not so much. If it’s something I know I’ll use again, it will be listed here. Just so you know, I’m not being paid by anyone to endorse this stuff. I have provided links for you to visit in case you’re interested in finding out more.

Never thought I’d like Nike shoes but the Nike Free has me hooked. The greatest benefit of this model of shoe is the natural movement, responsiveness, and feeling of running barefoot while still wearing a shoe. They are lightweight as well. I will caution you though—when you first start wearing the Nike Free’s you will have to gradually build up your miles in them. I recommend starting by running no more than one mile in them at first. Wearing them as street shoes for a few days isn’t a bad idea either. Give yourself a couple of weeks to gradually increase your running mileage in them. The shoes made me change my running stride and it was for the better. I’ve become more of a mid-foot to toe striker and before the Free’s I was more of a heel striker. I haven’t had any injuries since changing to the Nike Free and I attribute that to the natural feel of the shoe and the change in stride.

Clothes
I mostly use Nike Dry Fit running clothes but I have a few articles of clothing from Asics. For many years I’ve also used Road Runners Sports line of clothing. They make good quality clothing at a price lower than the name brand stuff. Great company and worth a look for running shoes and clothes. 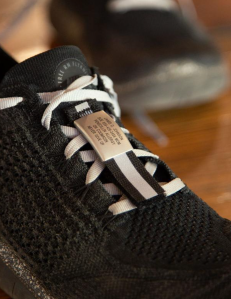 I’ve worn Road ID tags since 2007. I can’t imagine running or cycling without Road ID gear. I wear the FIXX ID which is a military dog tag style ID made of stainless steel. One side is laser engraved with my name, age, blood type, known allergies, and my emergency contact info. I like the FIXX ID because I can wear it while running, cycling, playing golf, boating and really all the time.  All of my running shoes have the Shoe ID attached to the laces on my right foot. The tag has the same information as the FIXX ID and the Velcro strap has a reflective strip to aid in visibility during dusk or dark running conditions.

Road ID High Visibility Gear
Most of my running is in the early morning hours before the sun rises and many of the streets I run are not illuminated very well. It’s important that I’m seen by drivers on their way to work each morning. I wear the Road ID Reflective Belt and attached are two white Supernova Lights set for solid illumination in the front and one red Supernova set to flash on my backside.  The lights are bright and are powered by two CR2032 batteries.

I wear a hat on most days and one of my favorites is the Road ID Race Hat. The hats are made by Headsweats with CoolMax material. The hats have reflective piping along the edges of the hat to help motorists see you in the dark. I don’t think they sell these anymore but you can find similar ones at the Headsweats website.

I started using the Fitbit Flex in 2013. Since then I’ve have used the Force (now discontinued), the Surge, the Blaze, the Ionic and now the Charge 3.  What I like about the Fitbit trackers the most is their mobile app and web dashboard. To me, the Fitbit app is by far better than anything from the makers of other activity trackers. Reviewers seldom compare the mobile app that goes with the tracker and I think this is a terrible omission. 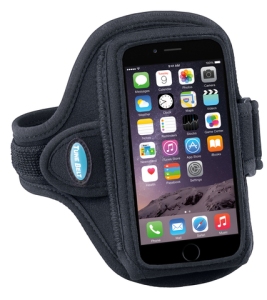 Need an armband or belt to carry your mobile device? Check out Tune Belt.  They make well-made armbands and belts at an affordable price. I use their iPhone armbands most of the time when I run.

NOTE: It’s the year 2020 now and I still have this but rarely use it anymore. Why? Because of this: 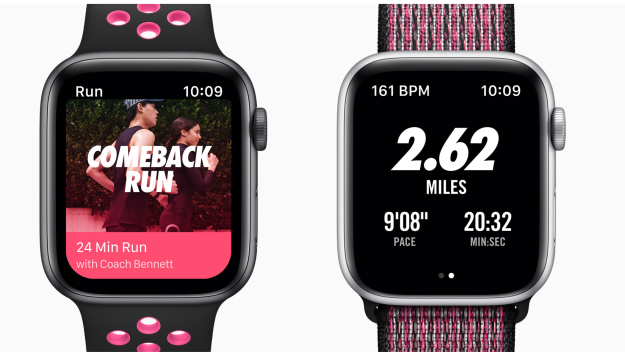 I have a Macbook Pro, two iPads, the iPhone 11 Pro and I’ve been a long-time user of iTunes so I’m pretty entrenched with Apple products so it shouldn’t be a surprise I have the Apple Watch too. I do love it but it’s not perfect.  In fact, I dumped the Fitbit for a while but came back to it a few months later. Yes, I wear an Apple Watch on one wrist and my Fitbit on the other! I still love the social aspect of the Fitbit and for me, the sleep tracking is better as well. For everything else though, I use my Apple Watch. 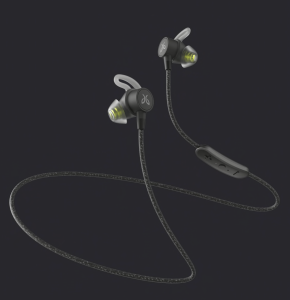 Jaybird makes some awesome earbuds for Bluetooth audio, I don’t think you will find a set of wireless earbuds that sound better. The Jaybirds sound quality isn’t quite as good as wired earbuds but its close enough for my tastes. Getting the proper fit isn’t easy but if you work at it you will find a fit that works very well. I have tried and tossed several sets of Bluetooth earbuds before switching to the Jaybirds. I’ve had several different versions of Jaybirds over the years but the Tarah Pro is my standard set of Jaybirds. My older versions I still use for my gaming on my Nintendo Switch and iPad(s).

NOTE: When Apple came out with the noise-canceling AirPods Pro in 2019, I switched to them for the most part. I’ll still use the Jaybirds as a backup until they get lost or die. You really can’t go wrong with Jaybirds or Airpods.

Once in a while, I’d rather not wear an armband but still want to take my mobile phone with me. That’s when I bring out my SPIBelt. The belt is very small and lightweight. I also have the optional race toggles that allow me to attach a race number bib to my SPIBelt.

UPDATE: I’d say I wear this every time I run anymore. I use it to carry my phone, ID, toilet paper, energy chews, keys or whatever. Sometimes I wear it with it completely empty because you never know when you might need to carry something you find along the way. 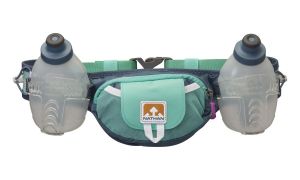 When I’m out running in the afternoon heat of Georgia (I try to avoid this as much as possible!) or when my distances are longer than 10K I use the Nathan Trail Mix Hydration Belt to carry my phone, gels, and my favorite hydration fluid. At first, I found it a bit tricky getting it adjusted so it doesn’t bounce around but once I got it figured out the belt keeps everything steady and easily accessible. If you have a larger mobile device, you might want to go for the “Plus” version which has a larger storage pouch. I didn’t get it and wish I had but the regular version still works for my purposes. I also have a couple of extra hydration bottles so I can stage them somewhere along my running route when the runs are very long.

On shorter runs in the heat of the summer, I take along the Nathan SpeedDraw Plus water bottle. It has a thumb loop and hand strap to make it easy to hold and a pocket large enough for my iPhone 6, keys, gels, etc. The 18-ounce bottle is insulated and reflective.

Body glide Anti-Chafe Balm / TriSlide SBR Anti-Chafe Spray / 3M Transpore Tape / Blistex Lip Medex
On long runs in hot and humid weather chafing, blisters and rashes are going to happen every now and then. For me, it’s hard to figure out when the conditions are right for any of them but when in doubt I use Body glide or TriSlide to protect my skin. Body glide is in stick form much like deodorants/anti-perspiration stick applicators. TriSlide is in spray form. The body location where I need the protection determines which protectant I use.

Sore nipples from my shirt rubbing are a common problem I have. Unless you have an extremely hairy body 3M’s Transpore Tape works great for covering the area to prevent irritation. The tape is transparent, breathable, waterproof and easy to apply.

In cold weather, good ole ChapStick works for keeping lips from drying out and cracking but my preference is Lip Medex from Blistex.